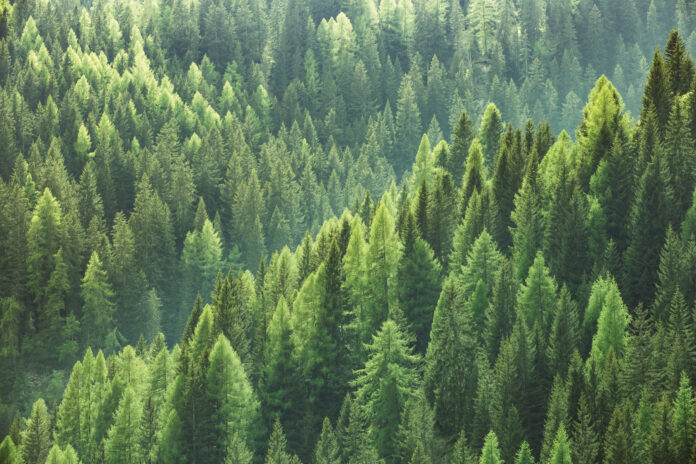 The trees around your home or cottage can help paint a picture of how past glacial activity, historic land-use practices, and time have worked to shape the landscape and forests of the region. By better understanding the processes that have influenced our cottage community forests, we can make informed decisions that work to maximize their health and longevity while minimizing their management expense and risk.

Here at the southern end of the Canadian Shield, glaciers scraped the surface down to bedrock, leaving behind a uneven layer of nutrient-poor soil. The first species relied on wind-dispersed seeds, like eastern white birch and poplar, to colonize the land. Pioneer forests are short-lived, and as shade levels increase, leaf-litter and woody debris build up the soil, providing the necessary growing conditions for more shade-tolerant species, like pine, oak and cherry. These mid-tolerant species rely more on birds and mammals to disperse their seeds great distances.

Pine and oak are well adapted to growing in thin rocky and sandy soils, and tolerate mid-scale fire events, and formed the primary forest in much of the region. They also proliferated due to Indigenous land management efforts, which utilized controlled burning to create habitat for wild game, and to promote harvestable food crops. As shade levels increased and growing conditions shifted, shade-tolerant forest combinations of sugar and red maple, yellow birch, beech, and hemlock began to rise. Less fire-tolerant than pine and oak, they tend to dominate areas of deeper, wetter soil by creating heavily shaded under-stories that promote the regeneration of more shade-tolerant species.

Our cottages or homes may exist within a forest type anywhere along this spectrum of pioneer, mid-tolerant or full-shade tolerant species. How you plan for long-term forest succession and management will vary depending on the forest type and species combinations present on your property.

Areas of Muskoka that were more recently farmland or cleared land may have large numbers of white birch and poplar. These species are fast growing, exhibit significant branch die-off as they age, and are prone to insect stress and seasonal storm damage. Fast-growing poplar and aspen trees are disposed to imperfections in their growth which often lead to frost cracking, branch failures, and fungal infection.

Pine and oak are the more common trees within this forest type. These species can produce a lot of deadwood in the canopy. The best course of action in the near-term is removing lower tiers of dead branches, and ensuring that mature trees are provided the necessary space for healthy growth. In pine and oak forests, it is important to remove large branches that have been storm damaged or that rub the trunk of an adjacent tree to prevent bark loss and subsequent fungal infection, as they may be hazardous to parking areas or the cottage itself.

In the long-term it is important to promote the establishment of the next generation by thinning out more shade-tolerant species in the understory or individuals with poor growth forms. Mid-tolerant species need sun on the forest floor to germinate and grow. Mature trees with almost full canopy spacing truly reach a spectacular old age. For trees adjacent to the cottage, long-term pruning plans can also help shift the lean of the tree away from the cottage and allow us to keep important shade or privacy trees close to the cottage without posing a significant risk.

Shade-tolerant forests now dominate many areas of Muskoka, as a result of historic harvesting of competing species like pine and oak, as well as the reduction in mid-scale forest fire events for which they are poorly adapted. Managing dead wood in the canopy, removing limbs with poor attachments to the tree trunk, and selecting for the best growth forms to promote are all important ways to promote the long-term health of these species.

Long-term planning in these forests will also depend on the shade-tolerant species present. Balsam fir are not particularly long-lived species, and can pose a threat when left too close to infrastructure. Balsam fir is important for providing habitat for wildlife, but allowing maple or yellow birch to grow more broadly will ensure longevity in the trees you have selected to keep. Eastern hemlock are a beautiful and long-lived species in the region. However, it is important to monitor them for signs of storm damage, and insect activity. Hemlock’s long and broad branches make the trees prone to wind and snow loading, which will often lead to the failure of large mature trees. Managing the branch density and reach over the cottage is important for mitigating risk from these species.

Ultimately, developing an adaptive management plan is an important way to promote the health of your trees, while minimizing risks to people and property. By working with professional arborist services like Muskoka Tree Solutions, you can ensure that you are making informed management decisions based on the latest science from wildlife and forestry professionals.