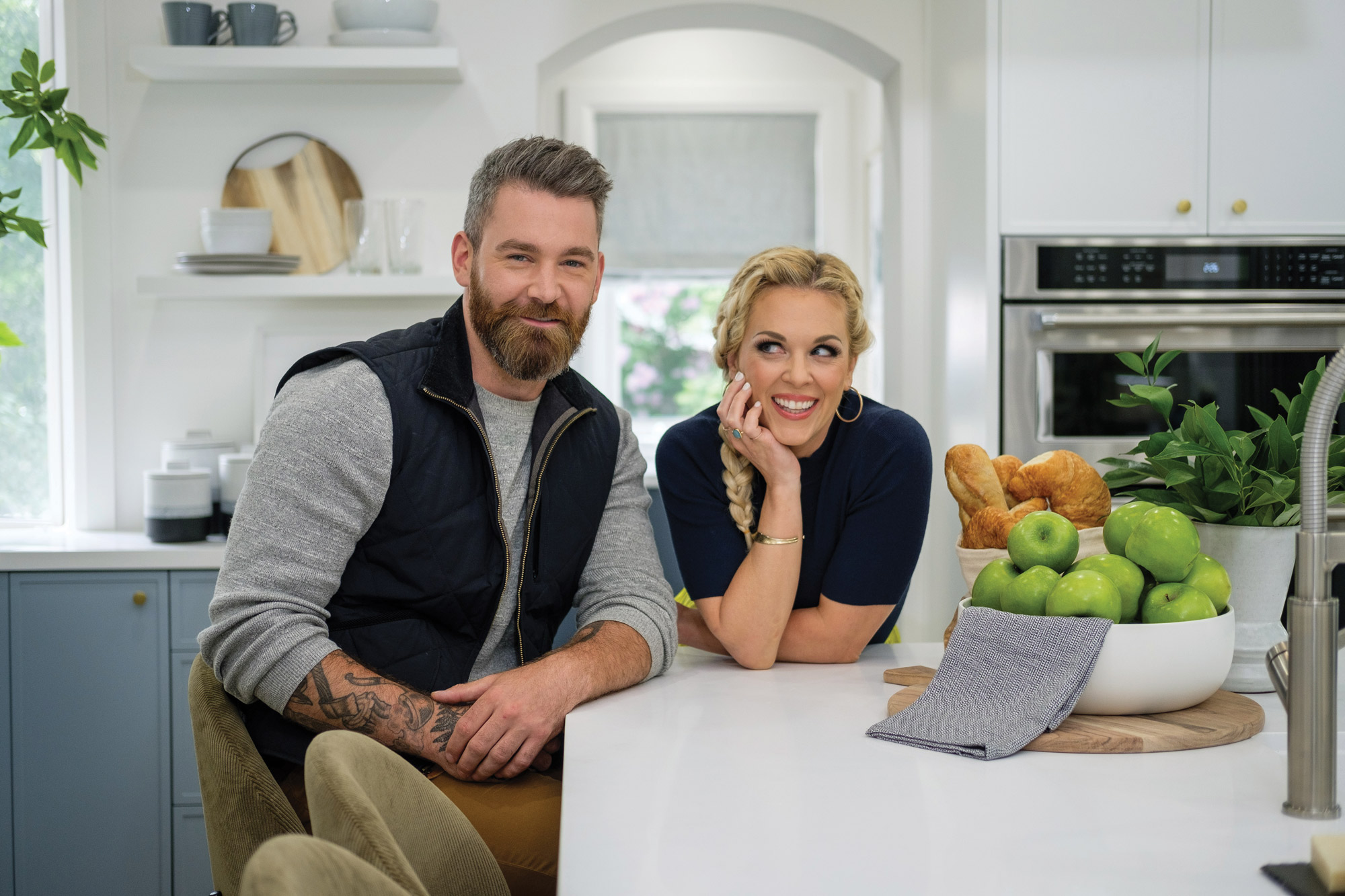 Making It Strong, Making It Hers, Making it Home

Kortney Wilson’s story of making it through the last two years, while Making It Home with all new co-host Kenny Brain.

When the clock struck 12 on January 1st, 2020, I don’t think any of us could have anticipated what was to come. Surrounded by loved ones in a packed bar (remember those?), champagne in hand, I know I definitely couldn’t’ve. While 2020/2021 was a seemingly ludicrous time for us all, one of its silver linings, or rather, a little gift it gave us, was forcing us to find strength under unpredictable circumstances. Re-evaluating our lives, our priorities, and ourselves, and oftentimes, experiencing growth because of that. Recently, I had the opportunity to speak with a quintessential representative of taking the hard times, and thriving in spite of them; experiencing dark, low points, yet never admitting defeat. Emblematic of personal growth, strength, creativity, authenticity, and love, Kortney Wilson’s last couple of years show us all what a truly brave, courageous woman looks like in times of uncertainty. What started as an interview with the HGTV Canada star about her show, Making it Home with Kortney & Kenny, turned into a real conversation about love, isolation, and new beginnings. Not only is Making it Home with Kortney & Kenny a show I’m excited to see for her iconic designs, and new charismatic co-host and Big Brother Canada star Kenny’s carpentry skills, but it’s a show that represents change, growth, and above all, finding the strength to keep going.

“I’ve gone through a lot of personal stuff over the last couple of years, so it’s exciting to be back to work, and it’s also a fresh start, with a new host – and he’s amazing,” Wilson discloses. When Kortney started the second season of Making It Home, she knew things were going to be a little different this time around. With a new co-host by her side, Kortney was initially apprehensive about the transition. “I was a little nervous about getting to know my new co-host. I’ve been on screen with Dave for many, many years and I know that’s always the elephant in the room when we’re discussing the show, but the reality is, it was time to move on for both of us. But it made me sad. I was wondering if I could have chemistry with anyone else on camera, because I’d never had a co-host other than Dave,” she admits.

After their divorce in mid-2020, Kortney set off to find a new screen partner that would not only complement her design prowess on the job site, but complement her personal energy on camera. And she feels so grateful to have found Kenny to be just that. “I definitely connect with him like a sibling, we push back on each other in a way that is healthy and fun!” Wilson says. “He’s so funny – he’s absolutely darling, and we have such great banter. Behind the scenes, he and I would just mess around and sing Barbra Streisand in the car. We would save all the design talk for screen so everything was super authentic,” she adds. Not only is their personal relationship a highlight of filming for Kortney, but the new energy Kenny adds to the show genuinely benefits Kortney’s design vision as well. “Being able to see everything fresh through his eyes, things I have been doing for years, was a gift. It rejuvenated me and revived this whole experience,” Kortney shares.

As a longtime lover of HGTV Canada and Kortney Wilson’s work, I needed to know what we could expect this season. As per titular suggestion, Kortney and Kenny work with couples to turn their houses into homes. “When people have gotten in over their heads, or dreamed of doing a certain renovation and can’t quite get there, or can’t agree on things within the couple, they ask for our help. We transform their homes for them,” explains Kortney. “First and foremost my goal is always to appease the client,” the designer clarifies, but Making it Home has other goals in mind too. Kortney wants to reach a very broad audience of people who are dreamers. People who go on Pinterest and go online and think they can’t turn it into something – I want them to understand that design is not rocket science. Any design that you make can be changed. People have this fear of ‘Oh my God, what if I get it wrong?’ and my answer is always ‘So what if you get it wrong!’, try something else! We’re talking about paint.

The fear needs to go away. I really do believe that – even if you don’t have the vision that I have,” Kortney emphasizes. The designer is excited for her show to influence the way people approach home design. “There are all of these shows out here now that show you exactly what to do. Take one of the designs that you love and apply it. If you love one of the designs that we did this season with white walls, baskets on the wall, and blue cabinets, go for it! Use that! I want people to allow themselves to dream,” expresses Kortney.

While aesthetic dreams and client vision are at the heart of the designs we can expect this season, Kortney is also sure to apply her years of real estate expertise to ensure her clients are making a solid investment with their renovation. Spending a large portion of her career flipping houses for profit, Kortney knows creating a home for a specific client requires a different approach. “I was able to take a lot of big chances and risks with my choices when flipping,” Kortney says. Whereas renovating homes for a specific client can be “risky business, because eventually I’m going to hand the home back over, and they’re going to have to live in it,” she says. “As a Realtor, I do have a different perspective, because I want to maximize their investment,” Kortney explains. “Though I want their [home owners’] personalities to shine through, I have to balance it. If they want pink polka dots, maybe I don’t put pink polka dots on every surface all over the house. If they eventually want to sell the house, I need to know the home is going to appeal to the masses,” she continues.

Though Kortney is an acclaimed expert and utilizes those skills throughout the show, fresh-faced Kenny isn’t afraid to contradict her opinions…which she appreciates! And let’s be honest, we the viewers love a little playful banter as well. Laughing at my implication that the co-hosts seemed in sync on set, Kortney clarifies, “Oh, we’re often not on the same page!” …which makes this HGTV Canada fanatic so intrigued to find out more. “That’s actually one of the reasons he stood out in casting,” Kortney discloses, “When the production asked him ‘What do you love about Kortney Wilson?’ he replied, ‘I mean…I like some of her stuff…’” she explains, laughing. All this to say, I think the fresh dynamic on season two of Making It Home is going to be even more engaging than the original duo we’ve seen year after year on HGTV Canada.

“The reality is, things change, and things evolve, and it doesn’t mean that you forget your past, it doesn’t mean that you don’t recognize it, but it does force you to embrace the future. So from that perspective, having the show come out now is part of the healing process. And I’m not going to say it’s always easy. Healing sometimes is hard.” Kortney shares, vulnerably.

The last year or so has been difficult for us all, but watching brave women like Kortney in the public eye, sharing their stories, can help us all feel a little less alone. Wilson wants us to know that “just because I’m on TV doesn’t mean that I don’t go home and cry, or listen to a song and it reminds me of something emotional, or that I don’t get nervous about to set for the first time with somebody new, these are all real emotions.”

To my fellow creators, dreamers, HGTV Canada fans, or anyone who has felt a little bit alone during this time, I invite you to support, engage with, and listen to stories like Kortney’s. Be inspired as she picks herself up, creates a new start, works her butt off, and changes the lives of her clients for the better. Because if anyone can make a house a home, it’s someone who has, in spite of it all, finally found her own – in herself, in her kids, and in her passions.

Making It Home with Kortney & Kenny airs Wednesdays at 9pm on HGTV Canada. 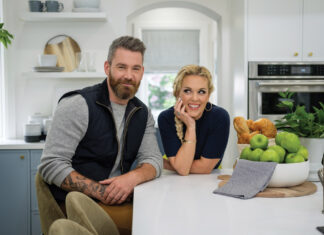 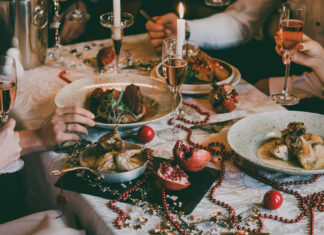 Hosting for the Holidays at the Lakehouse 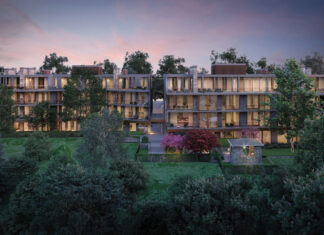 No. 7 Rosedale: A Generational Address 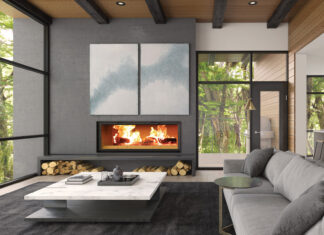 The Fire is so Delightful

Your Guide to Muskoka Forest Management